Shahrzad Malekian (Born 1983, Iran) is an interdisciplinary artist working with video, performance and sculpture. Her works often embodied with contemporary human in her/his complex relations, power structure, and gender from the private to public domain. Malekian has a bent for enveloping the artistic concepts in layers of glamor, fantasy, and sarcasm, with socially critical and gender conscious statements. She has shown her sculptures in various exhibitions and biennials in Iran, along wearable objects she creates for her performances. Her videos have been shown internationally in group exhibitions in Brazil, USA , Germany , Sweden, Norway, Finland and London. Her video piece was selected for International Film Festival Rotterdam and Göteborg International Film Festival in Jan 2013. She was finalist for MOP CAP 2015 prize. Malekian lives and works in Tehran.

I am a performance artist whose work evolves from observing everyday life and phenomena. I have been working with performance art since year 2000 and currently I am doing my doctoral studies at the Academy of Fine Arts, University of the Arts Helsinki. In my ongoing artistic research I focus on methods, phases and languages in collaboration processes between myself as a performance artist and experts and scientists from various disciplines, i.a. cosmologist researching dark energy.

John Court (b. 1969 in the UK, living in Tornio since 1997) is a duration performance artist for whom the time is one of the most important elements of his work. Sometimes that makes him performing for 8 hours, duration of a work day and sometimes performing the whole time the event is going on or the performance venue (museum, institution) is open each day.
More recently he has been interested in letting the objects and materials he uses in his performances to determine the duration of the piece. He doesn’t consider his performances solo works, since they always include collaborative elements from curators, organizers, artists, viewers, objects, spaces and time. Court’s works are sensible to the site and they often create a parallel rhythm within the rhythm of the site with the ongoing repetitious action. All his works are fundamentally concerned with drawing or writing, in that drawing connects the elements of line, movement, space and time.

“I have chosen performance art consciously. The situation in which you, the spectators, are on one side and I am on the other suits me. I need that division in order to break it. Though everything doesn’t always go as I wish. It’s not easy.That’s why, naturally, my performances are about uneasy interpersonal relations.”

(b. 1983) lives and works as an artist and curator in Yangon, Myanmar. He started creating art after graduating in Zoology in 2005. Moe Satt is part of a new generation of Myanmar artists to emerge after the year 2000, with a different approach to making, from conception to embodiment. He was invited to be the resident artist from several locations including Rimbun Dahan (Malaysia, 2008), Hooyong Performing Art Center (S-Korea, 2008), 3331 Arts Chiyoda (Japan, 2011), De Deelstaat Nijmegen, (Netherlands, 2013). He has actively participated in live arts festivals in Asia, and occasionally in the West. He has participated in serval major exhibition including the Busan Biennale (2012), CAFA biennale (Beijing, 2013), Concept Context Contestation: Collective-Driven Art In Southeast Asia (Bangkok, 2013), and The Journal of the Plague Year (S Korea, 2014). Moe Satt also work regularly as a curator and he founded Beyond Pressure, an international festival of performance art in Myanmar.

Find out more about Moe Satt.

Irma Optimist has for a number of years been a prominent figure in Finnish performance. She has adopted Optimist as a last name to counterbalance the Finnish melancholy. She has presented over 160 performances since 1989 in Finland, USA, Japan, Canada, Germany, Austria, Poland, France, Lithuania, Estonia, Belarus, Romania, Denmark, Sweden, Slovakia, Hungary, Israel, United Kingdom and Ireland. 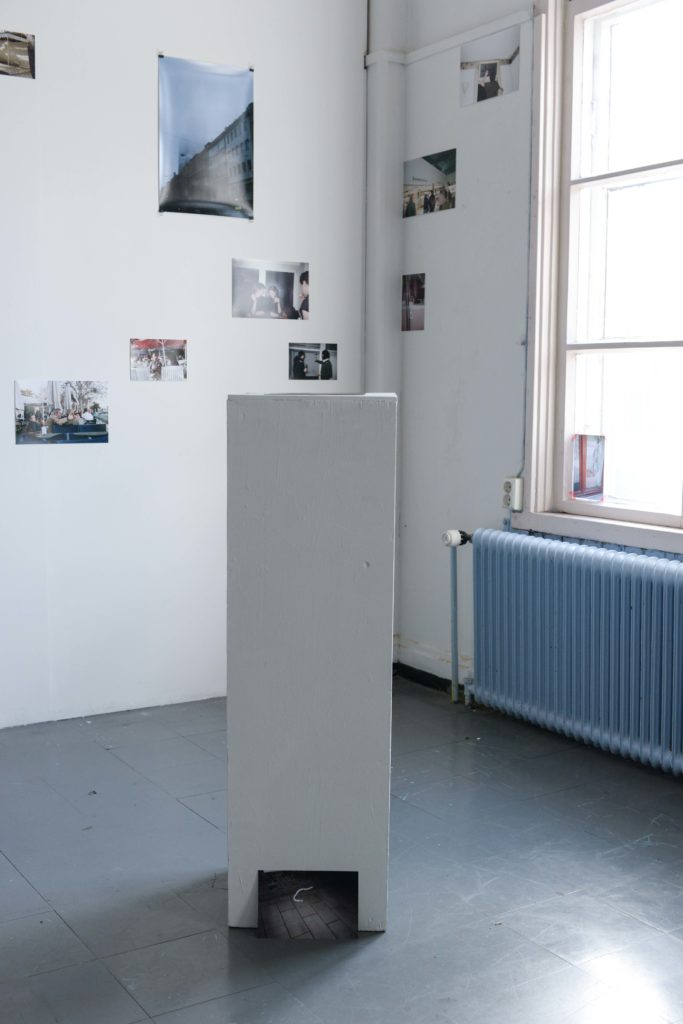 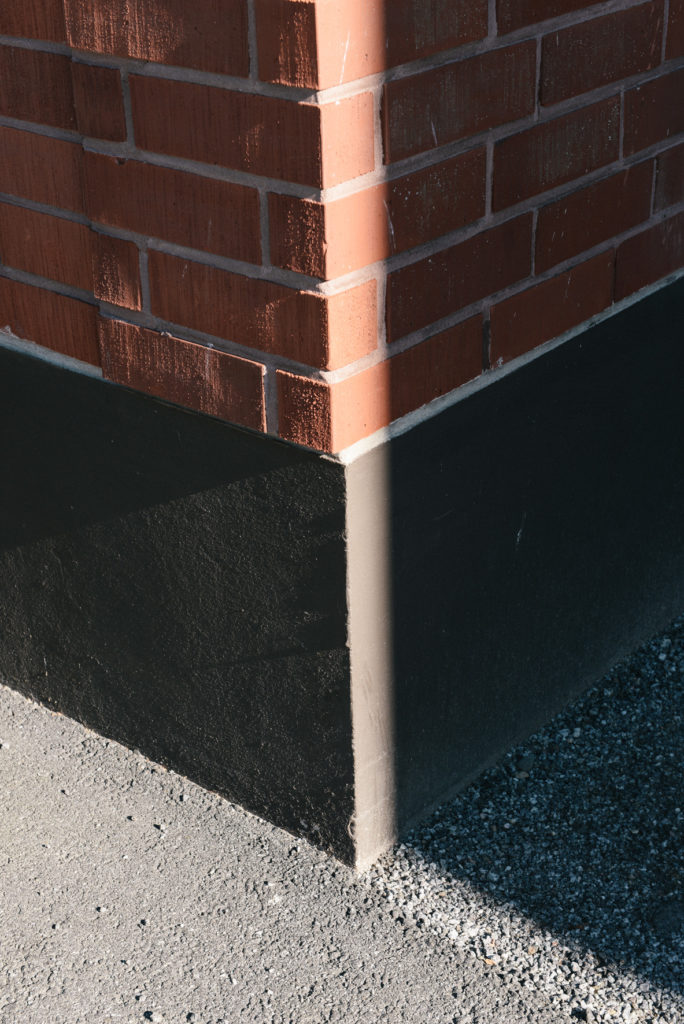 „Migration always means a change, a change of place, the change of the known surrounding into something new and unknown.So when I come to a new environment and walk in it, move in it, don ́t I walk with every step into the unknown? Don’t  I enter it and make it in a certain way to mine? Conquer it. With every step in this unknown place I migrate to a new location. Don ́t I make it just with my presence somehow to mine? Don’t I leave in every location a trace and every place one in me? And if I walked an entire site, went through every road, didn’t I make it to my place?“

Mope16 is an international performance festival now organized for the fourth time by Platform rf., previously the festival has been held in 2002, 2005 and 2008. Originally named “Movement to performance” soon changed in to the short version of the title Mope. In the beginning the aim was simply to gather all so called performances from Vasa and elsewhere which were not directly related to “Art”, e.g. Wasa Tattoo shop did a hook-hanging performance with the tunes of Bon-Jovi in the background. Alongside with professional performance artists it made a new and strange combination! This uncanny mixture of different performances might be a reason that all three festivals have been successful in terms of audience and reception. 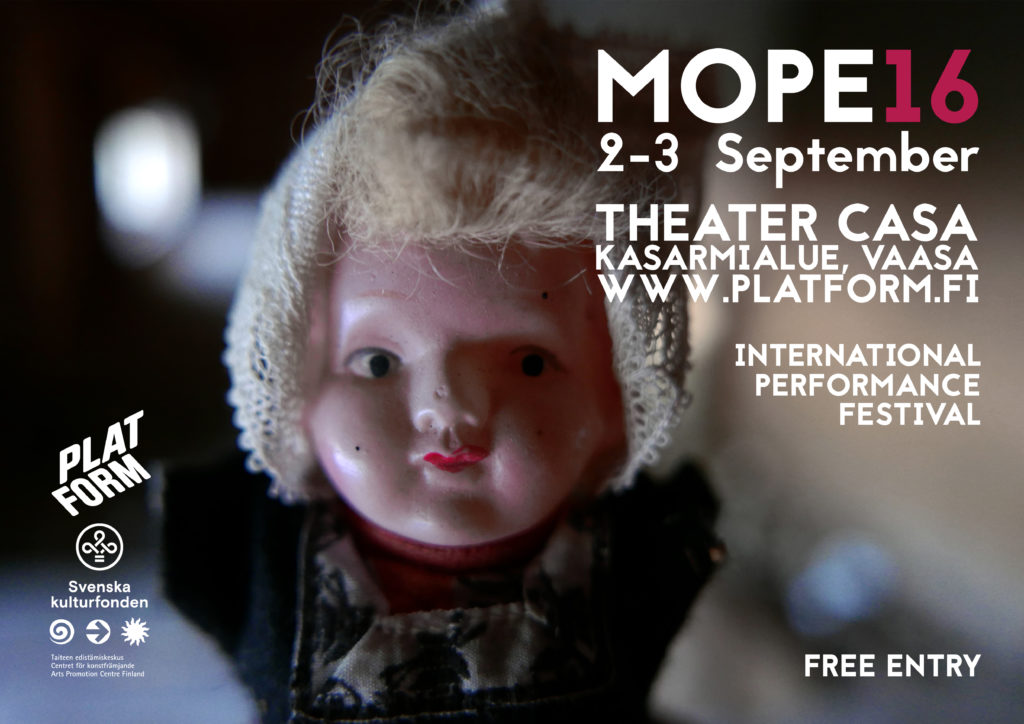